Scoop! Here it is, the new iPod

It’s good to wait in front of Moscone Center, here in San Francisco, two days before Steve Jobs’ keynote. Sometime it can happen to obtain a true scoop…

Today, MacityNet staff has noticed something of really unusual, considering the level of security that Apple is used to deploy around its new products

So here we are: what’s new. A new adverstising photo that show the brand new iPod. A special one, because it will be narrower and probably without a large display.

Those are the photos we have taken from outside the Moscone Center. The others we have taken, from inside, are not available because of an explicit request from the staff working on the site.

In the past weeks many sources talked about a flash based iPod. We have something more real to offer: a slogan that came with the billboard: “240 songs”, that means around 1 GB of memory. Flash or disk based? Probably flash, solid state, of course.

We cannot show the images of the new iPod because we were forced to delete them from our cameras, but we can describe it. It is without any screen (that’s maybe because the slogan is “Life is random!”), small, with a shape more vertical than the other iPod. The color is white, and it seems like a small remote control that fits confortably in a single hand.

In few hours Steve Jobs will show all the new things Apple has prepared in the last months. But with this little scoop we hope to help many people to be satisfied for some hours, or to help others to became crazy until they will see what’s really new here at Macworld Expo in San Francisco!

What will be its name? That was not possible to see in the billboard. But we have an hypotesis: “iPod micro”. Why not?

See you on January, 11 with our special report from the keynote and the Expo showfloor with a lot of pictures, interviews and new product details.
Check the MacWorld Expo Special Page for the latest news… 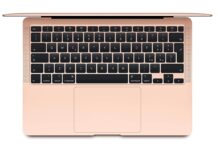 I migliori accessori per Apple Watch per l’estate 2020