The iPlate – a personal interpretation of a device to come

Before you start reading… iPlate it’s a personal view of a new hibryd input/output device – it is no forthcoming Apple product since I haven’t any information from the company neither i want to do some scoop on rumours.

I applied some of the technology Apple and other third parties are using and developing in a new product designed as a “dream” machine.

When I first saw the G4 Cube and the Apple logo positioned on the 2×3 Grid shown by Steve Jobs at MacWorld NY 2000 Expo I was asking myself: “What next?”

There was a space left in the grid for an innovative product that, like the cube, would excel in design and innovation but instead of being a “desktop” machine can be a portable one.

The trend to minimalism, to the reduction of a computer to its pure form could lead to a result…
from the cube (with basic tridimensional geometry) to the plate?
A thin object that has new functions and new ways of communication and interaction. 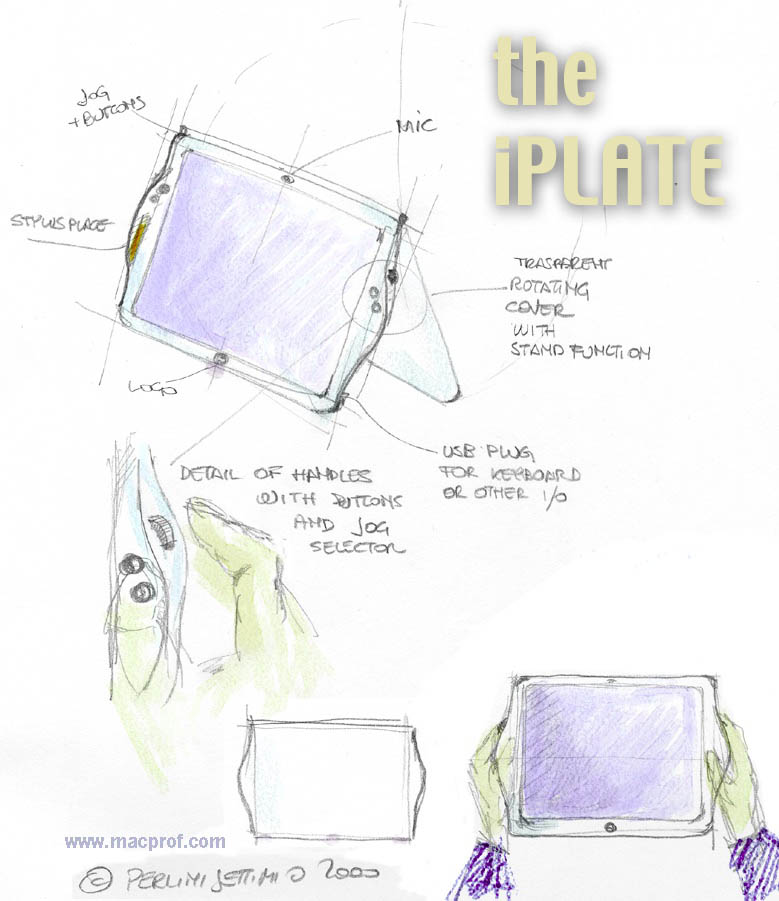 Apple has stated that it wouldn’t produce a Palm device anymore and that the company is committed only to one OS.
So what?
No little PDA, no Newton anymore? I think this is the right interpretation.
But Apple hasn’t sold to other companies the basic idea that makes Newton a unique machine: writing recognition.

So I put down some sketches (very basic sketches) of this personal idea… a portable device that is also a tablet with pen input (or finger input if you want to use an on-screen keyboard).

As you see on the first picture the plate is actually an LCD screen that has two handles with buttons (thay can be also little trackpads) and a rotating jog for easy navigation trough web pages or playing games, or making a presentation, or…

The LCD surface is Touch sensible and you can use it with a Pen or with your fingers to tap on dockable virtual Keyboard.

The idea of a Tablet with incorporated LCD screen is certainly not new… Nemetscheck (the developers of the hi-end CAD AllPlan and recent buyers of VectorWork’s company Diehl Graphsoft) introduced its D-Board in the 1999 and Wacom (who was the developer of D-Board) sells it PL 300 and PL 400 tablets that use a similar technology.

But there’s more than point and see …. imagine what can do a similar device with support to recognize your writing and Japanese and Chinese Ideograms: with the power of MacOS X and multiple processing the translation/interpretation could be a breeze.

Strange enough in the following days came the news about Apple developing the so called “Rosetta Stone” project a feature that brings script recognition to MacOS X.

The iPLATE itself could be only a pointing and viewing device connected to another Mac via Airport or BlueTooth technology: but in this case it may need an operating system, a video connection and a battery so that it seem a costly gadget without having the feature of a standalone tool.

But one more recent Apple’s technology caught my attention: the ADC connector for the new monitor line that sports USB, Video and power on the same cable.
Was it just designed to reduce desktop cable caos or for something more?

If we imagine a little central unit (i called it the “brick”) with the core electronics of an iBook or Powerbook, the ADC connector could be used to bring in and out all the signals needed to interact with the iPlate: the video and audio (via USB) coming from the brick, the pen input trasmitted by the active surface of the iPLATE (via USB), the vocal commands coming trough the Mic (via USB) and obvously the power to make the iPLATE function.

We have now two different products: the iPLATE standalone unit, a I/O device that can be connected to any recent Apple Desktop computer and iPLATE with his brick (or electronics in any other thin form factor) that is a full feature portable, laptop or desktop computer.

Obviously the brick is a solution for using standard equipment like DVD readers that can’t work vertically: the whole electronics could be hosted on the stand like on a normal laptop (with reversed allocation) but this solution has more versatility and would cost less…

I imagined that the cover panel that acts also as a stand (permitting the use of the iPLATE in several positions) can function also as a support for the Brick, making it work at different heights and positions.
You can use the combination of them anyway you want… leaving the brick on the desktop and working with the iPLATE as a real (cool – no warm batteries!) laptop, using the iPLATE on its vertical position like a spacesaver terminal (with voice and touch commands inputs)…

You can also use it in a traditional way connecting an USB keyboard and a mouse trough the USB ports on the side of the iPLATE. The keyboard itself could be folded on the back of the screen.
At the end of the day you can close your device folding the cover and obtaining an portable computer, no bigger than a current powerbook, and bring it with you, or you can bring home only the central unit and connect it to another iPLATE in your dinner room…

As we said before a similar device would be useful for different purposes that are not only for specific markets but are able to introduce new ways of interacting with your computer.

and can turn rapidly into a full feature standard desktop or portable computer.

It’s only a dream? This personal rough sketches are only a glimpse of a future device but most of technology that works inside the iPlate is ready or about to be in six months…
We’ll wait and see… 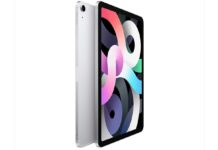 I migliori supporti per iPhone e smartphone in auto